We are honored to be featured in a special report published by the San Diego Business Journal on minority-owned businesses. To be recognized amongst other accomplished businesses that are growing while making a difference to society is very validating to everyone in our team. 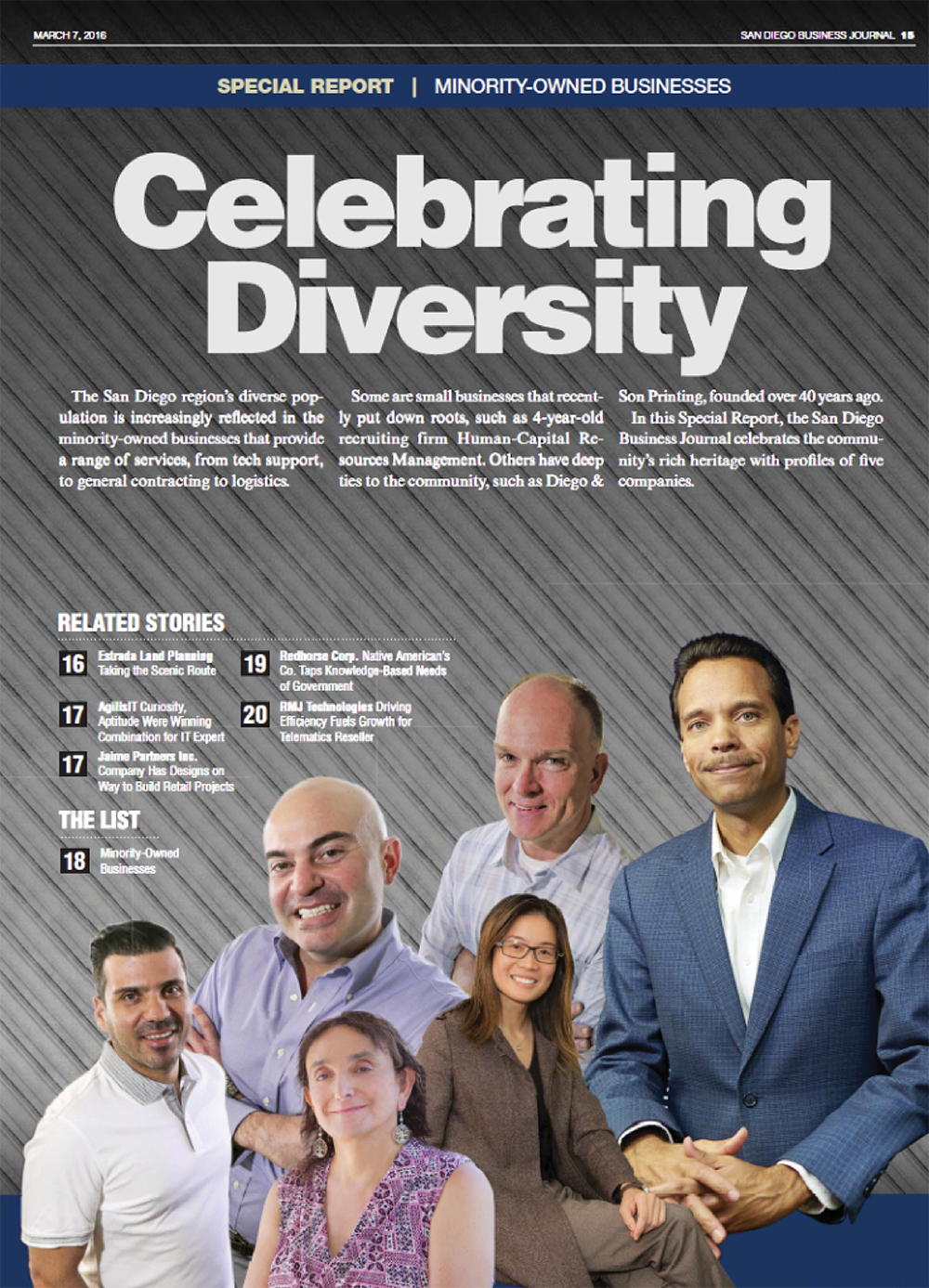 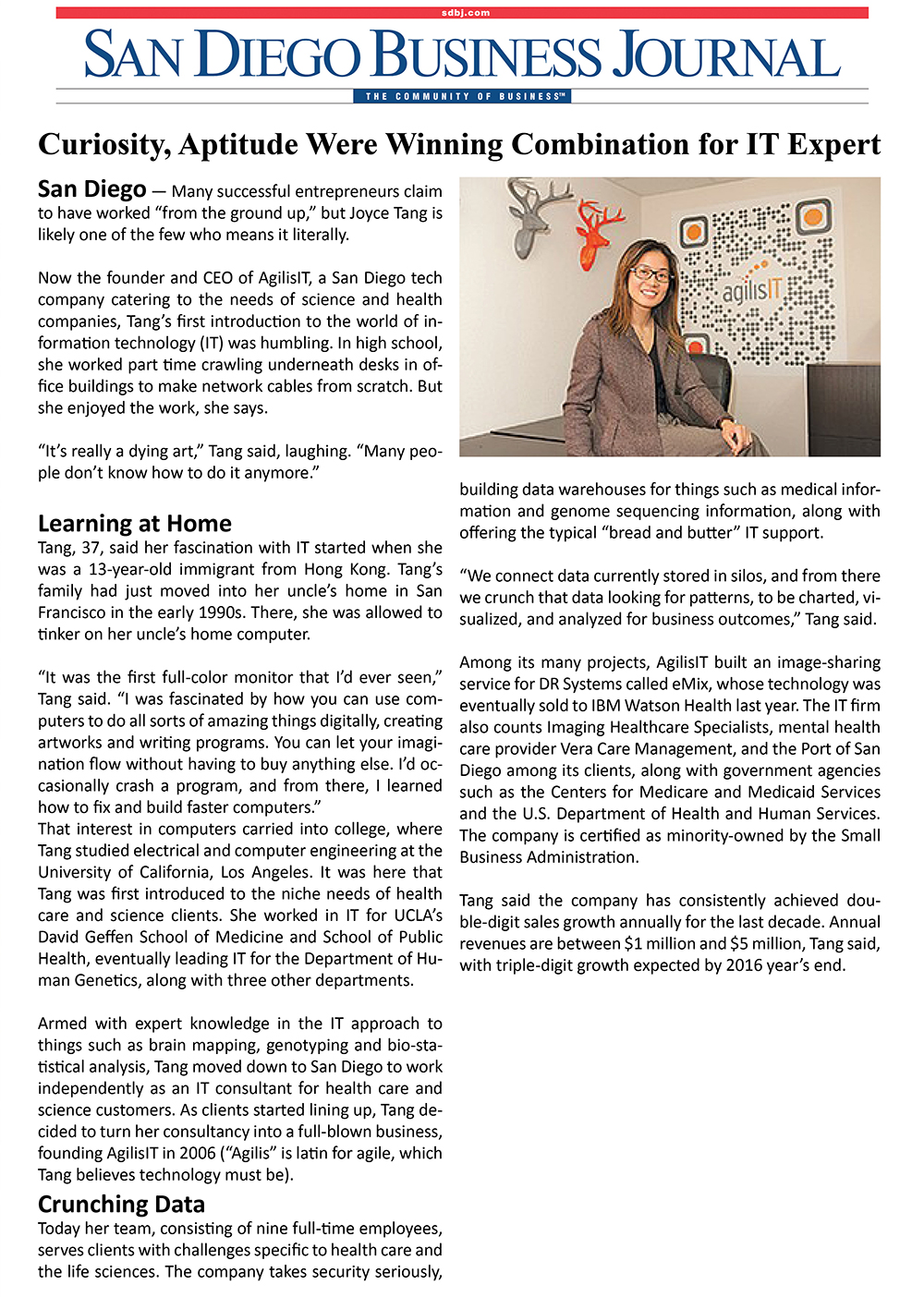 San Diego — Many successful entrepreneurs claim to have worked “from the ground up,” but Joyce Tang is likely one of the few who means it literally.

Now the founder and CEO of AgilisIT, a San Diego tech company catering to the needs of science and health companies, Tang’s first introduction to the world of information technology (IT) was humbling. In high school, she worked part time crawling underneath desks in office buildings to make network cables from scratch. But she enjoyed the work, she says.

“It’s really a dying art,” Tang said, laughing. “Many people don’t know how to do it anymore.”

ang, 37, said her fascination with IT started when she was a 13-year-old immigrant from Hong Kong. Tang’s family had just moved into her uncle’s home in San Francisco in the early 1990s. There, she was allowed to tinker on her uncle’s home computer.

“It was the first full-color monitor that I’d ever seen,” Tang said. “I was fascinated by how you can use computers to do all sorts of amazing things digitally, creating artworks and writing programs. You can let your imagination flow without having to buy anything else. I’d occasionally crash a program, and from there, I learned how to fix and build faster computers.”

That interest in computers carried into college, where Tang studied electrical and computer engineering at the University of California, Los Angeles. It was here that Tang was first introduced to the niche needs of health care and science clients. She worked in IT for UCLA’s David Geffen School of Medicine and School of Public Health, eventually leading IT for the Department of Human Genetics, along with three other departments.

Armed with expert knowledge in the IT approach to things such as brain mapping, genotyping and bio-statistical analysis, Tang moved down to San Diego to work independently as an IT consultant for health care and science customers. As clients started lining up, Tang decided to turn her consultancy into a full-blown business, founding AgilisIT in 2006 (“Agilis” is latin for agile, which Tang believes technology must be).

Today her team, consisting of nine full-time employees, serves clients with challenges specific to health care and the life sciences. The company takes security seriously, building data warehouses for things such as medical information and genome sequencing information, along with offering the typical “bread and butter” IT support.

“We connect data currently stored in silos, and from there we crunch that data looking for patterns, to be charted, visualized, and analyzed for business outcomes,” Tang said.

Among its many projects, AgilisIT built an image-sharing service for DR Systems called eMix, whose technology was eventually sold to IBM Watson Health last year. The IT firm also counts Imaging Healthcare Specialists, mental health care provider Vera Care Management, and the Port of San Diego among its clients, along with government agencies such as the Centers for Medicare and Medicaid Services and the U.S. Department of Health and Human Services. The company is certified as minority-owned by the Small Business Administration.

No. of local employees: 9

Company description: IT for health and science companies

Key factors for success: Long history of experience in academic, government and private institutions specializing in meeting the unique challenges of science and health customers

At agilisIT, we believe trust is earned with hard work, dedication and fairness. Is that what you’re looking for in a partner?

Complimentary on-site assessment to identify any red flags in your network. We'll also advise you on how you can fix these issues.

I chose AgilisIT because they earned my trust. We asked them to complete several IT projects to support our corporate process improvement and quality management Continue Reading...

Cloud computing is the smart thing to do, but it’s not suitable for every business process. We take a careful and deliberate approach when advising and building cloud solutions for our clients.

We’re not afraid to say “No” when the solutions is not the right fit for you.

Use Cloud to Save Money

Thinking about putting your email system, files, backup, remote workspace onto the cloud? We consult with you and can help you implement the right solution.

Use Cloud to Make Money

Thinking about having an always-on, highly-scalable cloud infrastructure for your complex, proprietary or custom application needs? We help clients modernize their internal enterprise computing needs and build new profit centers on the cloud to expand their traditional business. See More.

TotalCare+ is our Total IT Outsourcing solution with a predictable monthly cost, a smart way for businesses to manage their IT needs cost-effectively.

With TotalCare+ you’ll have a highly specialized support team managing and monitoring your network, supporting your users, protecting your data and ensuring your business continuity. We save you time, money and avoid the costly loss of productivity.

Sleep Better At Night with TotalSecurity+TM

If you’re like most small and midsized businesses, you do not have a dedicated security specialist. Yet your business is at risk from external cyber attacks and internal threats 24/7. With our TotalSecurity+TM solution, we provide security without the hassle or cost of hiring someone in-house. We set up your security devices, manage and monitor the security of your network and data against malicious attackers.

Security is a constantly evolving field within IT and it takes multiple layers of defense to be effective. We take care of it all in a comprehensive solution. We unify stand-alone network security appliances, such as firewall, intrusion prevention and detection, anti-virus and anti-malware protection into one robust network security solution.

Worried about employees leaking confidential data? Being unproductive on the Internet? Concerned about industry compliance like HIPAA, SOX, PCI? Need a security expert for a complex issue? We can help.

If Your Server Crashes at 8am, How Hurt Would You Be?

Data backup is often an afterthought, but it shouldn’t be. Data is the currency of the 21st century. It is your business. It is your reputation. It is money.

We know how hard you’ve worked for success. That’s why we make it our business to protect businesses like yours.

Research shows that 70% of businesses that suffer a fire or major data loss go out of business in a year. With our TotalBDRTM (Backup and Disaster Recovery) service, you won’t become part of the statistics.

We sit down with you to define how protective your systems need to be in order to meet your business’ demand. First, we shore up your systems to prevent outages. Then we design, manage, fine tune and routinely test your backup system as the safety net.

Data can be a double-edged sword.

Even the smartest companies are prone to having data headaches. Proprietary systems tend to create data silos, and data silos bog down the information flow and real-time reporting within an organization.

Are you a research organization needing data management, optimization, performance tuning or analytics for your datawarehouse?

From sales data to research data. We help you identify the data management solution that is right for you.

Supercharge your team with a subject matter expert.

Do you need a subject matter expert (SME), product champion or senior consultant for your project? Leverage our network of talents to locate the SME, the specialist, or the industry veteran who is individually matched to your unique requirements.

Are you looking for an Agile coach, a Six-Sigma consultant, a data scientist, a business process specialist, an ERP consultant, a bioinformatics specialist etc? Come talk to us! We can help.

The era of cloud computing and big data is now.

We help organizations harness the power and capitalize on the paradigm shift. Our clients create new profit centers to achieve or strengthen their leadership position in the market.

Experienced with private, hybrid and public clouds, we work with you to choose the best route for your cloud strategy.

In healthcare? We are well-versed in designing and managing HIPAA compliant infrastructure and secure medical data exchange platforms using HL7 and FHIR standards.

Data can be a double-edged sword.

Even the smartest companies are prone to having data headaches. Proprietary systems tend to create data silos, and data silos bog down the information flow and real-time reporting within an organization.

Are you a research organization needing data management, optimization, performance tuning or analytics for your datawarehouse?

From sales data to research data. We help you identify the data management solution that is right for you.

We work with you to identify KPIs (key performance indicators) and critical data points – from sales trends to operational trends. You ask the business questions, we present the real-time data to support your decision making process.

We have helped CFO’s discover revenue leakage; we have helped healthcare organizations improve both their health and financial outcomes.

Got data silos, unstructured data and proprietary systems? We can help you extract data from different sources, perform data scrubbing, validate and analyze so your data is ready for the executive dashboard. 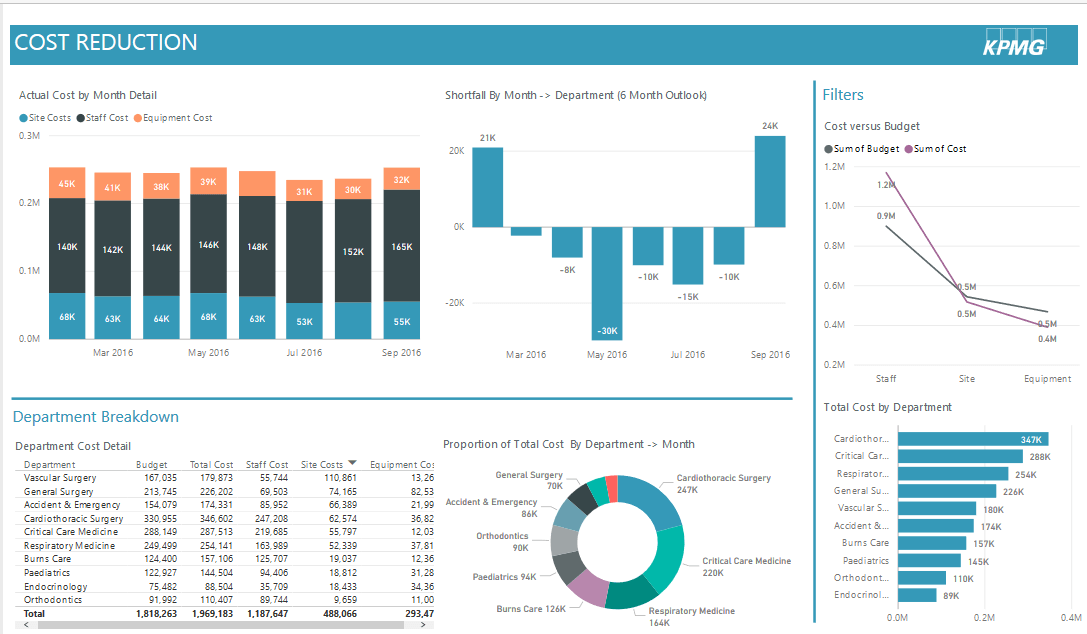 Supercharge your team with a subject matter expert.

Do you need a subject matter expert (SME), product champion or senior consultant for your project? Leverage our network of talents to locate the SME, the specialist, or the industry veteran who is individually matched to your unique requirements.

Are you looking for an Agile coach, a Six-Sigma consultant, a data scientist, a business process specialist, an ERP consultant, a bioinformatics specialist etc? Come talk to us! We can help.

We are the technology partner for market disruptors like you.

Visionary business leaders engage us to help them harness the power of emerging technology, from wearables, IoT devices to intuitively designed mobile solutions.

Have a custom software development project or need modifications on existing projects? We have the expertise to develop, manage, document and provide post-production helpdesk support to your end-users.

We work with you to determine what platform and software stack best suit your requirements, whether it’s Windows .NET, open-source LAMP (Linux/Apache/MySQL/PHP), MEAN (MongoDB/Express.js/AngularJS/Node.js), Ruby (Ruby/Ruby on Rails/RVM/MySQL/Apache/PHP) or Responsive Content Management Server (CMS) based web sites that automatically adjust to desktop and mobile browsers. you can be sure that you’ll have the most suitable resource for your project

In healthcare? We are well-versed in designing and managing HIPAA compliant infrastructure and secure medical data exchange platforms using HL7 and FHIR standards.